Introduction to the ADA

The Americans with Disabilities Act of 1990 and Section 508 of the Rehabilitation Act of 1973 are two examples of legislation that have helped to improve the lives of people with disabilities in the United States.

The ADA bans discrimination against any person based on disability or ability. After a two-year campaign to promote civil rights for marginalized groups, including Americans living with disabilities, the ADA was created. Advocates and disability activists lobbied hard for laws that prohibit discrimination, and they started to get cross-partisan support starting in 1988 for federal legislation.

ADA stands for the Americans with Disabilities Act. It was signed by President George Bush in 1990. Eighteen years later, his son, President George W. Bush, signed major changes to the ADA law. It is the country’s most important law on accessibility and the civil rights of people with disabilities.

The definition of disability was the most significant change. According to the original ADA, a person with a disability was defined as one whose condition “substantially limits major life activities.” This wording was very conservatively defined by the courts. This led to many ADA lawsuits, such as the Sutton vs. United Airlines case in 1999 and Toyota vs. Williams case in 2002, being dismissed. The plaintiff wasn’t defined as a person with a disability.

The 2018 amendment redefined “major activity” to include daily activities such as caring for oneself and performing manual operations. The amendment also included impairments of major bodily functions such as digestive and respiratory functions and neurological impairments.

Attorneys are enforcing the ADA

Californian businesses seem to be hit the worst, in part because of the Unruh Act ( CA Civil Code 51.) Under section 52 of the Civil Code, victorious plaintiffs are entitled to up to 3x the actual damages, no less than $4,000 statutory damages.

Plaintiff’s law firms are getting increasingly efficient at identifying SMBs. And 49.08% of the lawsuits filed in 2020 were filed just 5 law firms in the US.

The above is an example of how we make the picture below, ADA compliant. It is fully readable by a screen reader whereas the graphic below is not. 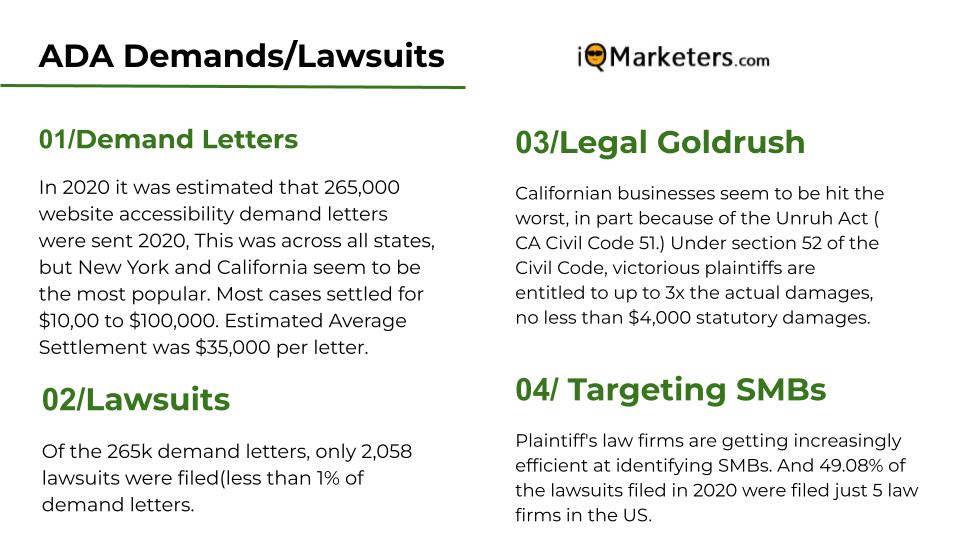 Who has to be ADA compliant?

It is a common misconception that the ADA applies only to large corporations. However, this is a grave mistake. All businesses, regardless of size, must comply with ADA legislation for their customers and their employees if they have more than fifteen employees.

The ADA is a broad piece of legislation that covers many different aspects of accessibility for persons with disabilities. ADA Title III includes public areas such as transportation and schooling. It also covers “public accommodations”, which is a legal term that covers businesses, restaurants, hotels, theatres, doctor’s offices, pharmacies as well as retail stores, pharmacies, medical centers, pharmacies, public libraries, parks, daycare centers, schools, and other places of employment.

Although it was obvious from the start that ADA applied to all businesses in the physical world, it is less clear that it applies online. It was not possible to predict the extent of internet usage today, as evident by the 1990 bill. A range of U.S. courts has issued a variety of rulings over the past decade, some stating that websites are not considered a “public place of accommodation.”

Is ADA compliance mandatory for websites?

As the internet became more popular and websites played a greater role in consumers’ interactions with businesses, the way that ADA was applied to web accessibility started to change. It has been clear that the ADA covers the internet since 2017. Legal scholars, disability rights activists, and court rulings all agree that online portals, websites, and online shops must also be accessible to people with disabilities.

Stephen Boyd, Assistant Attorney General, wrote in an official letter in September 2018 to Congress stating that “The Department first articulated its interpretation that the ADA applies to public accommodations websites over 20 years ago. This interpretation is consistent with the ADA’s title III requirement that the goods, services, privileges, or activities provided by places of public accommodation be equally accessible to people with disabilities.”

There are a few factors that have made ADA web accessibility such a hot topic in the legal world. One reason is that commerce has shifted to the digital sphere, and eCommerce has become a normal part of life. Many of our daily activities, such as ordering a taxi, booking an appointment with a doctor, and checking bus schedules, have been transferred to the internet. Web accessibility is becoming more essential as web interactions become more integral to our daily lives.

Awareness of web accessibility has increased over the past few years. Due to high-profile lawsuits and increasing awareness, people with disabilities know they have legal recourse if they experience an inability to complete an online activity or interaction due to any type of impaired condition such as vision, hearing, motor skills, or neurological and cognitive impairment.

The legal environment in the US makes it easy for disabled people to sue businesses. ADA Title III makes it clear that the defendant must pay the plaintiff’s legal costs, which is a departure from other areas of law. A disabled user does not have anything to lose by filing a lawsuit.

The majority of ADA Title III lawsuits are in favor of plaintiffs. The Department of Justice (DOJ), through a series of settlement agreements and a letter to legislators, has clarified that ADA compliance also includes web accessibility.

Big names such as Beyonce, Nike, and Domino’s were all in the news for their web accessibility lawsuits. However, the majority of cases have been brought against small and medium-sized businesses. According to estimates, 85% of ADA lawsuits filed in federal and state courts in 2018 were against small and middle retail businesses.

Small business owners feel forced to settle outside of court because it is almost certain that the court will find in favor of the plaintiff. A medium-sized business could lose all of its resources over the cost of defending a lawsuit. In comparison, the average settlement for an ADA lawsuit is $35,000.

There were 265,000 demand letters received by businesses in 2020. This is a significant increase in legal actions that were initiated following the discovery of inaccessible websites. In 2021, there were at least 11,452 documented federal filings. Over the last eight years, web accessibility lawsuits saw a 320% rise.

It is clear that a website that is not accessible to all users can be a huge liability for any company using the internet today. Remember that there is a growing market for people with disabilities. It’s worth approximately $21 billion and is more than both the Hispanic and African-American markets combined.

Digital accessibility is a core principle for marketers and businesses that understand the importance of users’ needs. Accessibility solutions for your website are essential, not only for your business to be protected from ADA accessibility lawsuits, but also to expand your market reach to even more site visitors as well. By making your site accessible to people with disabilities, you not only improve your chances of avoiding a lawsuit, but you also open up your site to a whole new group of potential customers.

I am pretty sure once they get a class action lawsuit they might, however, most of these demand letters are settled out of court, so it more than likely will never be public knowledge of just how much money they have to pay out.

Because what company wants to go public and admit that they have been discriminating against people with Disabilities?

Some general standards that may be helpful in website accessibility development in compliance with the ADA include ensuring that all content is accessible to all users, providing alternative methods of accessing content for those who cannot use traditional methods, and ensuring that the website is compatible with assistive technology. This means that the website must be able to be used by people who are blind, have low vision, are deaf, or have other disabilities that make it difficult to use a traditional website. The website design must be so that it can be used with assistive technologies, must be navigable without the use of a mouse, every video must have easy-to-read subtitles and many more.

There are a variety of devices and technologies that are used to support accessibility. One example is Screen Readers, which are software applications that can be used by people who are blind or have low vision to read the text that is displayed on a computer screen. Magnifiers are software that can be used to enlarge the text and images on a computer screen, making it easier to see for people with impaired vision. Text-to-Speech software converts text into audio speech.

Here are some web accessibility standards to keep in mind during website design and development for ADA compliance:

Why ADA plugins are not enough

While there are many so called ADA Plugins, why they can help, they are not the complete answer to making a Website, App, or Landing Page compliant.

Because what happens if the Plugin is interrupted during loading and you the underlying code is not compliant?  You guessed it, you could be looking at a $35,000 demand letter.

The ADA plugin should be a back up and not the only thing that you do to comply.  Also, the other thing is that there is only one plugin that we have tested that we feel offers a superior job at compliance.

Pretty safe bet that you have never heard that there is a $5,000 per year tax credit for making your site, landing pages, and Apps ADA compliant have you?

That is right! If you gross $1 million dollars or less a year or… If you have 30 or less full-time employees when done correctly, you can get up to a $5,000 per year tax credit on your Websites, Media, Landing Pages, and Apps to help make them ADA compliant.

If you need help with making your project ADA compliant, please get in touch with us and we will be glad to see if we can help.

Profitable Marketing Made Easy by iQMarketers.com

Carbon Negative For 30 Years And Counting Since 1992